The Home of An Award-Winning Interior Designer (House Tour)

admin
Redfern Terrace is the home of an award-winning interior designer, Kirsten Stanisich. Co-Director of Sydney-based interior architecture practice Richards Stanisich, Kirsten’s home is located in the inner-city suburb of Redfern. A strong sense of community exists in the urban suburb, which is defined by a leafy outlook and warm energy, and this is reflected throughout Kirsten’s interior design choices.

Kirsten founded Richards Stanisich with Jonathan Richards, and the interior of her home is a reflection of her dedication to her craft. Redfern Terrace, as the home of an award-winning interior designer, concentrates on the finer details of the space, creating a quiet refuge from the inner-city environment.

Light plays an integral role in creating the calm and tranquil atmosphere of the house, allowing a sense of recharge and purpose. The garden space, despite its small scale, plays an important role in bringing light into the home. The front of the house faces east and receives the gentle glow of the morning sun, lighting the heritage stained-glass windows in the front door and dowsing the hallway in gentle colour. The two large glass doors that lead out into the back garden allow sunlight to fill the dining space in the afternoon. This offers a fresh way for light to interact with the space, unusual for a terrace house.

Whilst the layout of Redfern Terrace stayed the same, Kirsten – as an interior designer – was focused on the joinery, fixtures and finishes to bring the home to life. The contemporary pieces – including the e15 light fitting that matches the soft pink and lilac blue colours of the stain-glass windows – and the traditional aspects of the home speak to one another. The interior of the house acts as a foundation for Kirsten to continue to react to and build upon. As the home of an award-winning interior designer, Redfern Terrace highlights the interplay between the old and the new, exploring conversation between all elements in a three-dimensional and authentic way.

The Home of An Award-Winning Interior Designer (House Tour) 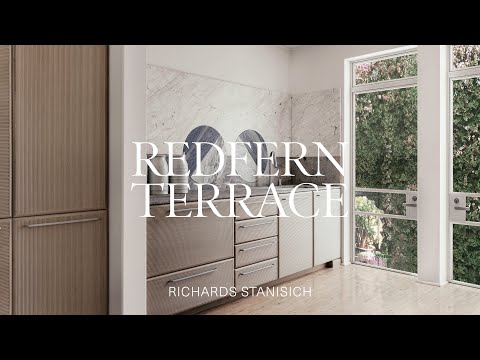